Gabbeh is one kind of rug produced by Lor tribesmen of Fars province for their own use. Rustic simplicity of design and colouring give the rugs an unaffected freshness. The Gabbeh are often made with non-dyed yarn of white, brown, grey and black.
Generally the pile is long and the number of weft in each row can reach even ten threads. The majority of the warps in Gabbeh rugs are made of goat's hair and sometimes of the sheep's wool.
In one or two borders of the Gabbeh rugs a single and simple geometrical design is woven repeatedly.
There is either a big medallion in a plain field or a very simple tree or a few small lozenges woven along the length of the rug.
Only one basic size is made approximately 1.00 m. to 1.20 m. width and 2.00 to 2.30 m. in length. It's difficult to find smaller sizes. 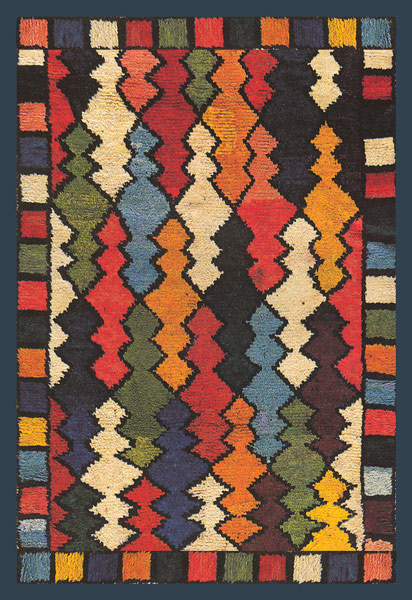 Shiraz
The history of carpet weaving in Shiraz goes back ten centuries ago. But during the reign of the Safavid dynasty this art gained considerable fame.
Although during the Zandieh dynasty (1750-1779) the art of carpet weaving was not equal to that of the Safavid dynasty, the art continued to progress.
Some rugs, which have remained from the era of Karim-Khan Zand in Shiraz, are proof of the importance of this art during that period. However, it should be remembered that Shiraz production has never had a top rank among the other fine and exquisite ones produced in Iran. In fact, there are very few carpet workshops in Shiraz and this city is only the centre of marketing the rugs woven by the tribesmen and those made in the villages.
The rugs produced in some of the villages surrounding Shiraz are woven on horizontal looms. They are of low quality, and are not to be compared with those made by the tribesmen who settled in this area.
The dyes are natural and the predominant colours are red, brown, yellow and blue.
Shiraz carpets have a large design repertoire that includes a variety of floral repeat patterns as well as medallion compositions.
A famous design, which is attributed by some to weavers of the Ghashgha'i and by others to the old and skilful artists of Shariz, is cypress and lily of the Valley design.
Many experts recognise that as "millefleurs" design. The field of this rug is designed as a Mehrab (Altar).
From the pillars of this Mehrab two half-length cypress trees are included in the inner part of the border (the cypress tree being the symbol of Shiraz). At the tip of these trees or in the other words at the top of the pillars there is a turreted bow. From a big vase placed in the lower part of the rug covering the whole field some flowers emerge together with lily of the valley twigs and narcissus (there are plenty of these in the fields of the Shiraz area). Another turret or bow, which is situated under the vase, connects the pillars to each other. Depending on the locality of its production, the border of the rug is decorated with Harati motifs or repeated designs of birds facing each other on both sides of the Harati flowers. Most Shiraz carpets are coarsely knotted and may be either in the Senneh or Ghiordes knot. Warps and wefts are mainly of sheep's wool.

Abadeh
In Abadeh and its surrounding villages small and medium size rugs and runners are mostly woven. More recently a small proportion of room size carpets up to 7 s.q m. Heibat-Iu, Moharramat, Zel-e-Sultan and sometimes Botteh Kordestan designs are woven into the carpets produced in Abadeh.
Abadeh carpets are good furnishing, the colours are generally a brick red or beige and various shades of blue, yellow and green.
The weave is fairly fine and the woollen pile, on cotton warps and wefts clipped quite thin. The knots are generally Persian from 1500-3000 knot per sq. dm.

The weave is fairly fine and the woollen pile, on cotton warps and wefts clipped quite thin. The knots are generally Persian from 1500-3000 knot per sq. dm.