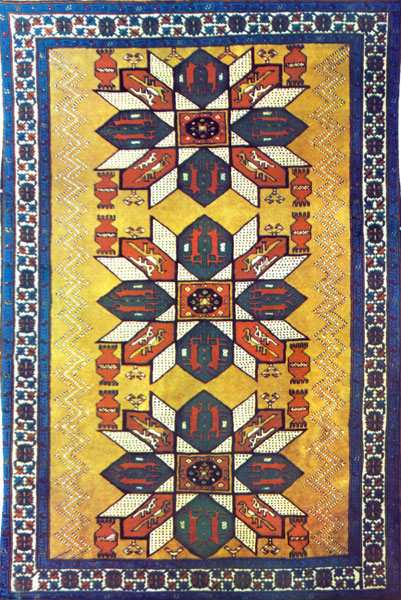 A great number of mediocre rugs are made by the Baluchi tribes which have been settled in the region of Khorasan around Mashhad, Torbat-e-Heydariyeh, Torbat-e-jarn, Sarakhs and in the Province of Slstan-Baluchestan around Zahedan and Iran-Shahr. A number of Baluchi Tribes in Afghnistan also weave rugs. All the Baluchi rugs are geometrical and stylised in design. One of the designs, which the Baluchi weavers like to produce is in the shape of a tree that is generally known as "The Tree of Life".
The designs of Harati, Botteh and Mina-Khani are woven in stylised patterns too.
Baluchi rugs are very light in weight with Turky knots. They are often made of local wool.
In the old times, the Baluchi tribesmen also used camel wool. The weft and warp of these rugs were taken from the wool of goats and sheep, but now cotton is normally used for this purpose.
Preferred colours are red, brown, black and beige and the dyes used are mostly natural. The dimension of Baluchi rugs is rarely more than 6 sq. m. and the most sought after and requested sizes are between "Poshti, Zar-o-nim and Kalleghi'. Baluch rugs are not made BIG RUG because the rugs are woven on the Horizontal looms can not be made larger than 6 meters. 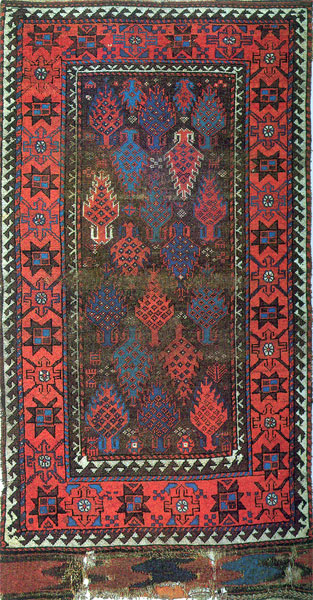