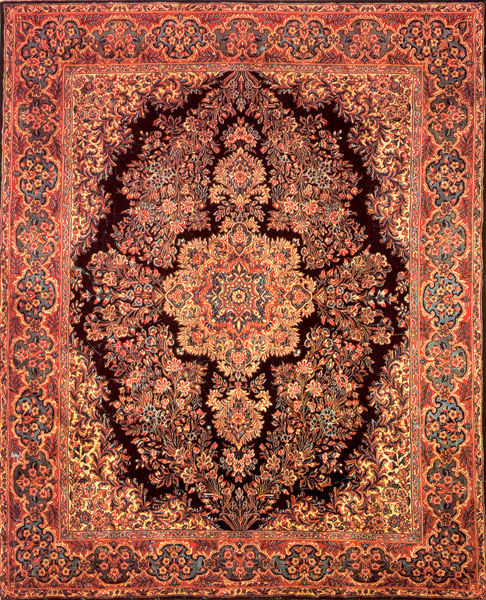 Kerman is both the name of the province and its capital. Although carpet weaving in Kerman precedes the Safavid dynasty, yet the flourishing period was during the reign of the same rulers.
After the fall of the Safavid dynasty, carpet weaving began to lose its importance.
Another hard blow was the rise to power of Agha Mohammad Khan Ghajar (1786-1797) whose frightful slaughter of the population destroyed the security and economy of Kerman, including its carpet industry. during this period, in spite of the scarcity of carpets, those available are so fine and of such a good quality that the exquisite taste and remarkable skill of the artists and weavers were evident.

Towards the end of the Ghajar dynasty, carpet weaving once again obtained its former splendour.
At present, some beautiful Kerman carpets of that period can be see in some of the museums of the world. In the 19th century, Kerman was one of the leading producers of a type of cloth named "Shawl", which gained fame in Europe, particularly in England.
After a while the Shawl became out of fashion and the Shawl weavers of Kerman began to weave carpets. Even now the Botteh (Paisley) patterns that originally were used in shawl cloth are in demand both in Kerman and the other carpet centres of Iran.
Kerman was one of the first cities in Iran where many foreign companies installed carpet workshops to supply the needs of the Western markets. The demand for these fine and desirable carpets increased after they where exported to the farthest corners of the world. The essay and the articles written by various researchers also contributed to their fame. During the First World War and afterwards, due to the financial crisis in America, the trade of Kerman rugs became somewhat shaky, but after the crisis was over, it regained its
former fame and splendour. Kerman homes because of the large halls and rooms are ,BIG RUG size in area is very common.
The Americans became fond of carpets with high pile and large flowers. After a short period their taste changed and they preferred carpets with a plain background and design with a small flowers.
So, the Kerman designers complied with the wishes of the Americans and produced beautiful carpets and rugs with harmonious and attractive colours. Every now and then one comes across old Kerman carpets which are even more interesting. This is why the old and antique Kerman have become favourite collectors pieces. The dominant patterns which are mostly used in the Kerman workshops are Shah-Abbasi medallion and corner, turreted Shah-Abbasi, Botteh, Eslimi medallion and corner, hunting scenes, Gobelin or heap, overall flower, Eslimi chain or repetition, tree of Life profusion, Koran panels (Ghab-Ghoram), portraits and panoramic scenes.
About a hundred years ago portrait weaving in Kerman became very popular. Thereafter, the skilful artists started to weave rugs of famous political, historical and religious personalities.
Among them the carpets and rugs commemorating the reign of Ardashir-Babakhan, the founder of the city of Kerman (226 a. D.), can be mentioned.

Almost all the carpets in Kerman are woven with local wool and some other with the   wool obtained from the provinces that produce wool which are Rafsanjan, Bam, Jiroft and the areas surrounding Kerman. In spite of the spinning factories that exist in this province, the weavers still prefer to use their own hand-spun wool.
The wool is glossy but sometimes very soft.
Kerman carpets are double-weft with Senneh knots.
Once in a while double or false knots can also be found here.
In the Kerman carpet there are many varieties of colour. Even fifteen to thirty colours can be seen in one single carpet. The fields of most of them are red. Light green, indigo blue, turquoise, pink orange and beige. Until recently, in the dyeing factories, these colours were used to dye shawls and carpets.
After the Second World War, synthetic dyes found their way into these factories. Since then, except in some limited cases, the wool used to weave Kerman carpets is always dyed with natural or with fast chemical colours.
The quality and the fineness of Kerman carpets are divided into four categories, which are generally known in the market by the double number 35/70,40/80,45/90 and 50/100. The explanation of these numbers is that the figures 70, 80, 90 and 100 represent the number of warps in seven centimetres of the length in a carpet. As each knot is tied over two warp threads, a carpet of 35/70 is 35x35 knots in 49 (7x7) sq. cm. And a carpet of 40/80 is 40x40 knots in 49 sq. cm. 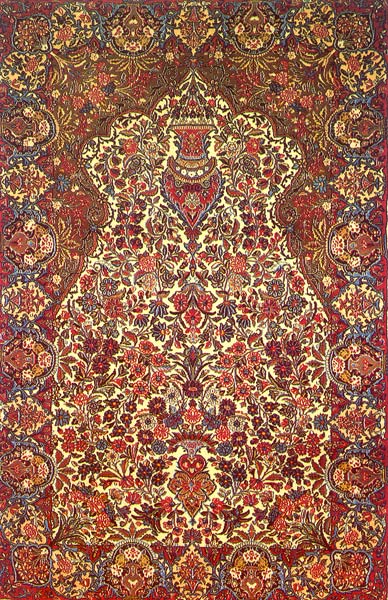 Ravar
An important carpet-weaving centre of this province other than the cities of Kerman, Rafsanjan, Sirjan and Mahan is a village by the name of Ravar that many erroneously call Lavar. It's situated to the North-east of Kerman, the carpets of this village that are very famous are known as Kerman Ravar.
Although Ravar is the improper name, some are still labeled as such. These carpets were   produced in Ravar village next to Kerman city in the northern region, and are known particularly for their fine weave and elegant, classically derived design of allover and central medallion formats. Whether Ravar Kerman or Kerman, these antique rugs can boast fine woven reproductions of European paintings, as well as curvilinear, dense allover floral patterns. Floral patterns woven into Kerman carpets are derivative of shawls for which Kerman was also the center of producing in the early to mid- 19th century. Most Ravar or Lavar Kerman carpets include a signature, either that of the weaver or to whom the carpet was woven for.
Kerman rugs and carpets were woven in all sizes( BIG RUG, medium  and small), some extending out to 10 feet. Typical manufacturing used an asymmetrical knot on cotton foundation, but rare examples include silk or part silk piles, or silk foundations with wool pile. Examples of BIG RUG ART Kerman “Carpet Museum “in Tehran and several major museums around the world are available.