Arak (former Sultan-Abad] is one of the most important carpet producing centres in Iran.
The carpet weaving in this area dates back to the time when Shah-Abbas the Great, gave his consent for the settling of a group of Armenians in that area. Among them there were many skilled weavers, but the main progress occurred during the reign of the Gajar dynasty. The basic reasons for the development of the carpet weaving industry was due to the fact that many merchants from Azarbaijan invested conspicuous sums of money for supplying and exporting carpets to the German markets.

Moreover, many foreign companies opened branches in Arak, for business enterprises and exportation purposes. The most famous of them was an English firm, Ziegler, which established workshops and installed looms (in 1883 in Sultan-Abad), for producing carpets according to the demand of the European market.
After the defeat of the Germans and their allies in the First World War, Arak lost most of its best customers.
Soon after that, the economic crisis in America (1929) and its extension to almost all parts of the world caused a grave setback in the carpet industry in Iran. This decline continued even during the Second World War.
Fortunately, after a very short period, with the effort and support of a great number of Persian capitalists this art regained its activity once again. The reason for the changes resulting from these wars and the depression was that the foreign companies, were forced to close their branches in Iran. Arak is one of the areas that reject is beautiful and BIG RUG.
It became necessary for them to transact their business activities through Persian merchants, who themselves turned over the orders to the local capitalists in different regions of Iran.
Most of the carpets woven in Arak are of medium quality but there are some valuable Saruqh and Farahan carpets that are highly regarded by buyers and collectors.
The colours used for these carpets are mostly herbaceous. Except for Farahan carpets, all the others woven in the area of Arak have Senneh knots. In this locality it is almost rare to find fraudulent knots (ghreh-jofti). The wool of the Arak carpets is of the best quality.
The design of the carpets, which y the way are' very limited in this region, differs from region to region. With the previous experience they had with foreign companies, the carpet weavers in Arak always used cartoons in the weaving process. Their sketches were usually composed of branches and leaves with blue borders and a rose-coloured background.
The carpet weaving centres of this province are as follows:

Among the different categories of Arak carpets, Farahan carpets are the most famous and renowned of them all. their design, knots and method of weaving are very similar to those of Sanandaj carpets.
At present carpets and runners with very small flowers with yellowish green colours resembling those of the Hersti design are produced in this area.
In Farahan as in Sanandaj, rugs resembling a folded horse saddle are woven.

The single-weft carpets woven in Tafresh and its surrounding villages are of rather good quality.
Instead of big carpets and runners the weavers prefer to produce Sajjadeh sizes in red, dark blue, beige, green and orange colours.
The weave is generally medium fine to fine with 1.000 to 2.500 knots per sq. dm. In antique pieces the number rise up to 4.000 knots per sq. dm. Which has captured a world wide fame. Some of these carpets, which are of medium quality, are generally known as "Musel-Farahan", 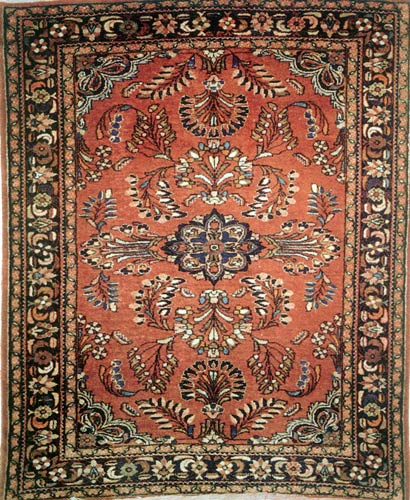 Amongst the Armenian community of this district, l.ilihan carpets are the most famous. These carpets have a velvety surface and are finely woven.
The design and to a certain extent the colours of l.ilihan carpets resemble those of "American Saruqh" Herewith, some explanation is given regarding the "American Saruqh" rugs mentioned above.
At the end of the First World War, a representative of an American firm, K.S Taushanjian of New York, who had commercial carpet activities in Arak, chose and created some patterns that he himself selected from the designs commonly used in Arak and Saruqh. Corresponding to these designs a large quantity of two-weft carpets with long pile in different sizes, with a red field and dark-blue border, or light-beige field with dark-blue border, were woven separately from each other. The long piled and beautiful carpets woven in the villages of Vies, situated in southern Arak have geometrical Botteh and Hereti designs.
Moreover, the skilful artisans have created a geometrical design that is very particular and difficult to find in the nearby villages. 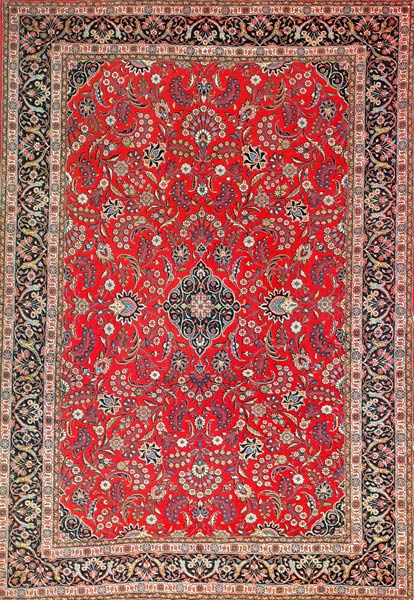 Saruqh approximately 40 kilometres north of Arak, has a good reputation among buyers in Iran and abroad and the fame of these rugs is widely diffused in the United States. The best carpets of this district are woven in a small village by the name of Giass-Abad. Decorator in Europe for his decoration of the carpets are beautiful and BIG RUG Saruqh.
Many different designs are used for modern Saruqh, among them the medallion and corner designs, Hersti Botteh and Lattice patterns. The classic colours used in Saruqh carpets are red, blue, beige, green and yellow.
Old and antique pieces had mostly pink and pastel colours. Except in some older pieces in the Senneh knot is used in Saruqh carpets.