The famous design of "Heret!" that is very popular among the Persian weavers, is attributed to the designers of this city.
Like other weaving centres in Iran, its progress is related to the period of the Safavid dynasty, but the real boom in the carpet industry began when the merchants of Tabriz installed many looms in this region for exportation purposes.
In this province, carpets are woven both with Persia (Senneh) and Turkish (Ghiordes) knots, (majority in the Persian knot).
The designs that are mostly used are Shah-Abbasi, Botteh and Harati.
The dyers utilise natural colours such as mauve red, dark blue and some other classic dyes. 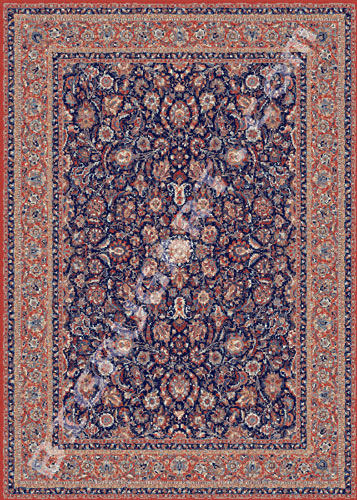 Mashhad, the capital of the Khorasan is the largest weaving centre in north east of Iran. In Mashhad there is a tradition of weaving in the style of Kerman or Yazd.
Mashhad has the reputation of not being very hard wearing, owing to the weakening of the yarn in the dyeing process. Mashhad carpets belong to the middle category, but some interesting carpets are found.
Typical designs of Mashhad carpets are Shah-Abbasi Medallion Arabesque and Hereii. The dominant colours are red and brown.
Many of Mashhad carpets bear the weaver's signature.
Some of them are Amoghil, Saber, Shesh-Kalani, Zarrineh, and Kafi. 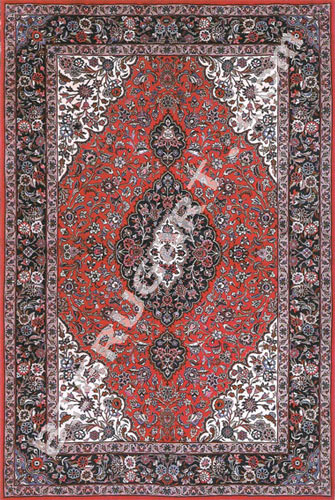 The town of Kashmar about 150 km South-west of Mashhad produces a great number of large sizes with different designs from Kashan, Kerman, Tabriz and Vararntn. The main colours are red, dark blue. There are also many subsidiary colour such as: beige, green and ivory.
Kashmar carpets are woven in the Persian knot, and the weave is like that of Mashhad. 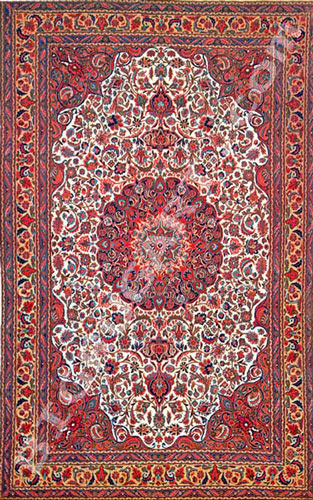 The finest carpets of Khorasan come from the Birjand region; the designs that are most preferred by the weavers of this region are Hereti (bee fish) and Botteh.
Orange-red, used with a contrasting blue are characteristic shades of Birjand rugs. Beige is often used as a ground colour of the field.
Birjand rugs are woven in the Persian Knot. Unfortunately fraudulent knots can be found in Birjand workshops very often. 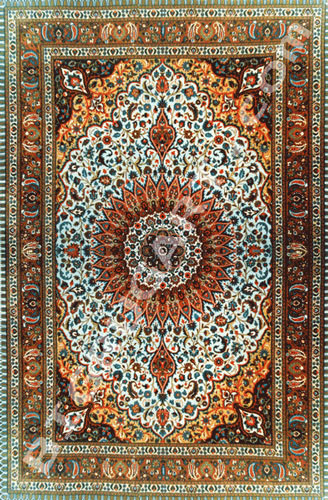 The vast Khorasan is one the most important weaving centres in Iran. The art of carpet weaving in this province dates back to the Sassanian period (241-641 a.d.). When Shah-Rokh Mirza (Timurid Dynasty), was in power (1405-1447), Harat the capital of this dynasty, which is now is Mud  is a city in the province South Khorasan in Iran and a county of the Sarbisheh County. Ferezmorgh is a subdivision of the city. Formerly up to the division of the Province from Khorasan it was a borough of today South Khorasan's provincial capital Birjand.
Archaeologists excavating in the southern historical town of Mood in South Khorasan province have unearthed ancient earthenware dating back to the Parthian dynastic era (248 BCE-224 CE). Excavations were conducted on an ancient mound located near the city of Birjand. The area is known for Mud  blankets and carpets that have normally a curvilinear design with a sun flower shaped picture in the center. The production of such carpets is usually high-quality. These carpets are made of wool or cotton. They attained their valuation by the decree of the Persian Safavid emperor Shah Abbas I, who not only arranged the building of the fortresses in this region, but also retained the original Persian design styles and knot techniques. afghanistan was one of the most important weaving centres in Iran.